Coins from Popes of the 9th century open up extremely interesting approaches to historical research.
In the latest study on Popess Joan (Habicht and Spycher, 2018) they played a decisive role.

The rulers of the Papal States were able to mint their own coins. In the 9th century, the popes were dependent on their patrons in the Frankish Empire. They had coins minted which corresponded in weight and design to the customary deniers of the Franks.
These are so-called combination coins: On one side the monogram of the incumbent pope and the inscription SCS PETRUS were minted. The other side showed the name of the emperor; this name was supplemented by the imperial monogram or the monogram of the city of Rome.
The letters are often intertwined in the monograms, the direction of the letters does not necessarily correspond to that of a text.

The coins of that time show no year and can therefore only be classified in a time window by the style and the combination of the names of pope and emperor.

Among other things, the following combination coins are important for the second half of the 9th century:

The monograms play a central role. Since some popes had the same name, the monogram had to be different.
The signatures of Pope Leo III (monogram LEO P) and Leo IV (LEO PA) differ only by the A in the addition PAPA.
Such nuances are of decisive importance for the temporal assignment..

Here is a coin with the monogram of Pope Leo IV in combination with the name of Emperor Lothair. In the horizontal the letters LEO and in the vertical PA.
On the other side in the center the monogram of Lothair I. On the outside there is his name HLOTHARIUS.

Other combination coins with Lothair I bear the monogram of Pope Benedict III. The coins are listed both in the CNI of 1934 and quoted by Berman in 1993 and are considered genuine.

Historians who support the legend theory see this as proof that the direct successor of Leo IV cannot be Joan, but that Benedict III must be the direct successor of Leo IV. This seems correct.
Amazing that such a combination exists at all: Emperor Lothair I had abdicated in early summer 855 in favour of his son Ludwig II and had died on 29 September 855 in the monastery Prün.
According to official papal chronology, Benedict III was elected pope in Rome exactly on this day, 29 September 855. He was probably not enthroned until the end of October.
Thus, such coins «should» not exist at all. - Obviously Benedict III was already earlier Pope, since Leo IV is only testified for certain until 853.

Louis II did not inherit the imperial crown until the summer of 855. These coins can therefore not date before summer 855.
They testify that Benedict III was the direct successor of Leo IV.
He presumably held the papal office until the end of 855. 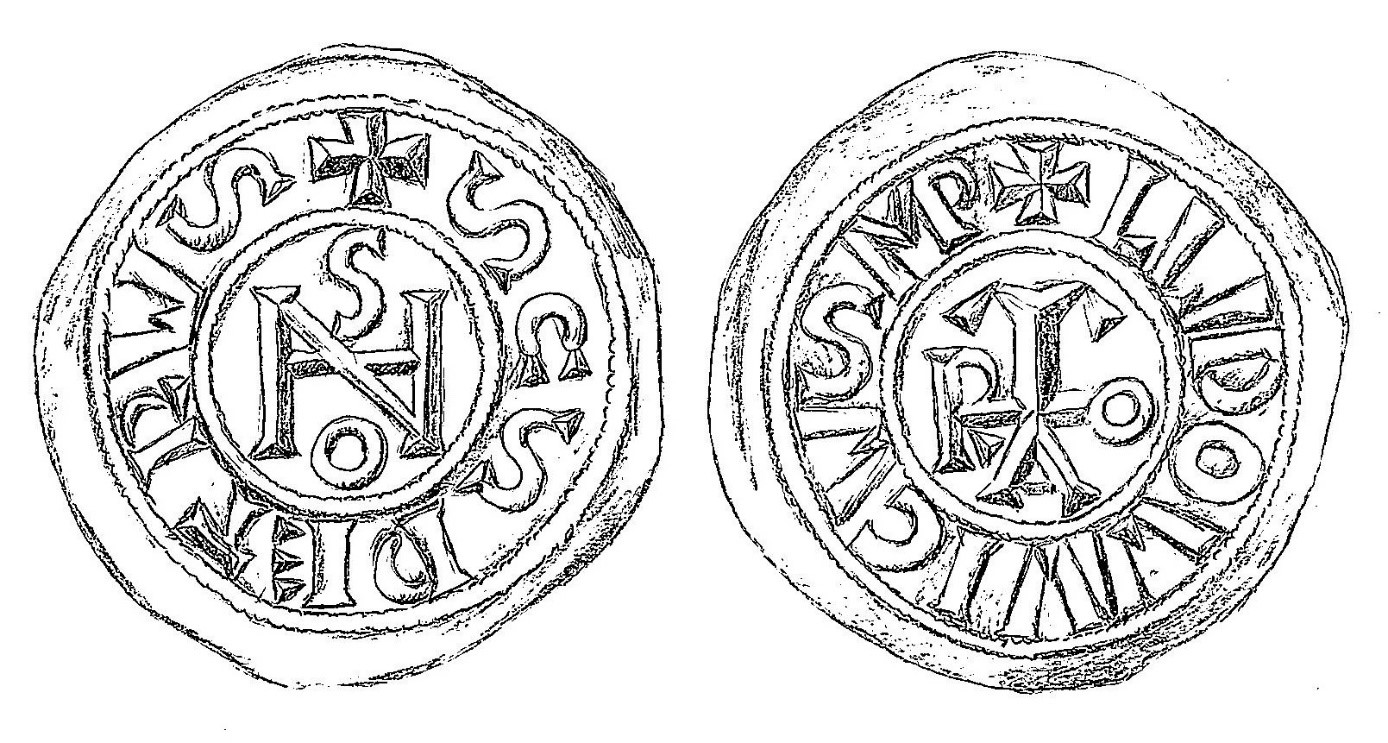 This combination coin is probably to be assigned to Pope John VIII or better: Popess Joan.
Stylistically it clearly belongs to the second half of the 850s due to its design and letter forms.
In the centre, the simple monogram with the artfully combined letters IHANI in the horizontal and S and O in the vertical, surrounded by the lettering SCS PETRUS.
The monogram is built on a square with the linear letters. All the letters have a central bar, giving them an accentuated three-dimensionality. The arrangement of S and O is also important - in contrast to the monogram of a later John.

Emperor Louis II names the reverse side. (LVDOVVICUS IMP), in the centre stands the monogram of the city of Rome (ROMA). Apparently, the new emperor was in Rome. The chronicler Botho reports on the sacred coronation of the emperor by Pope John.
We are thus in possession of coins of the Pope and her monogram in effectively contemporary objects. An extraordinarily clear indication that Joan - the Popess, John Anglicus, John VIII - is a historical figure!
Manuscripts could be manipulated by interested parties. There were only a few books in the early Middle Ages, writing and book production were effectively monopolized by the Church.
The coins, on the other hand, were minted in large numbers and it was not possible to take the entire number completely out of circulation.

Because many numismatists regarded the Popess as a legend and fictitious persons had no right of pre-emption for coins, these coins were given to the later John VIII. (pontificate 872-882). This, although this pope used a different monogram. 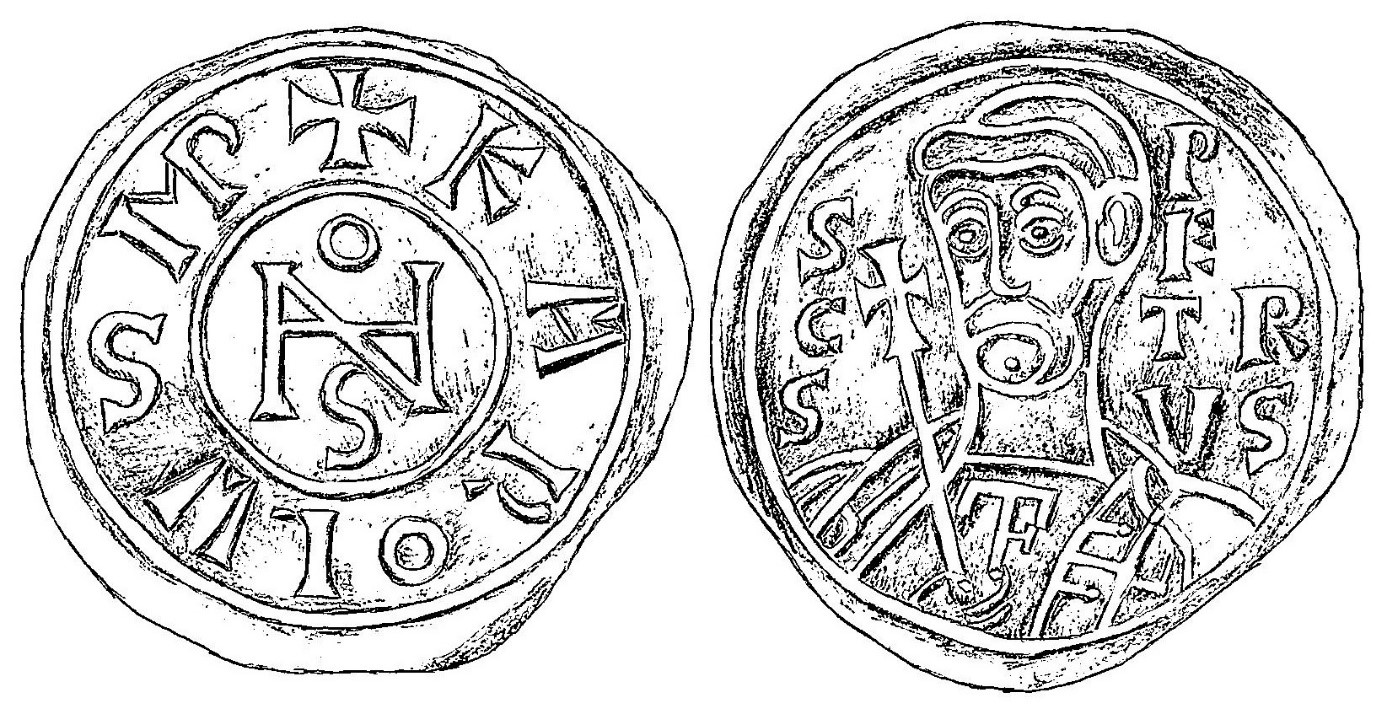 In the center the monogram, which strongly follows the earlier one. The linear letters IHANI in the horizontal form a rectangle. S and O are in the vertical, but in a different arrangement. In addition, the style appears finer and looser overall, the plastic effect is completely absent.
The name KAROLUS IMP surrounds the pope's monogram.

The back shows a portrait of a man and the inscription SCS PETRVS.

Charles the Bald had inherited the imperial dignity from Louis II in 875. The coin therefore cannot date before 875 and thus shows the monogram of the new Pope John VIII. According to written sources, the Popess Joan who called herself John VIII was removed from the Pope's list, which is why the next Pope with the name John was also a John VIII. A source of misunderstandings or deliberate confusion.

The coins thus occupy the pontificates in this sequence:

Text sources and the sequence of coins confirm each other and testify that there was a female pope - the Popess Joan.